Gertie and Bridget sleep under the stars 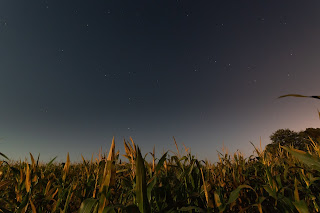 “Why?” Faye shouted at the form of her sleeping, ostrich-shaped brother. He let out what was approximately a snore, and continued his rest. Cobs of corn, stripped of their kernels by his beak, lay around him.
The group of travellers had been stopping periodically during their drive through masses of cornfields, either for refueling, stretching, or fresh produce at farm stands. Each time, it turned out Charlie the ostrich had picked out ripe cobs to munch on. At the end of the day, they had stopped in the middle of the endless stretch of corn stalks on the side of the road to take pictures of the setting sun and the stars dotting the sky. With light pollution, they just didn’t see views like this back home.
But Charlie, unable to use a camera without hands, sat down, ate some more, and, completely stuffed, fell into an unwakeable sleep in the little picturesque clearing.
“He always did sleep through anything,” Faye grumbled, folding her knees and wrapping her arms around them as she sat on her sleeping bag.
Luckily, the group had foreseen a possible lack of sleeping arrangements, and had planned accordingly.
Peter, Charlie and Faye’s older brother, lit a small pile of kindling in the middle of the circle of rocks he had gathered. A flame grew as he layered bigger sticks and then the firewood they had packed onto it.
“At least before he was like this I could lift him,” Peter said. Things had changed a lot when Charlie had been sentenced to remain an ostrich until his eighteenth birthday, and they kept discovering new ways in which things were different. Faye was now his only translator, as someone with a gift for talking to and helping out animals with her magic.
“Come on guys,” Bridget said. She took a clothes hanger she had untwisted and stuck a marshmallow on the point. “This will be fun!”
“Yeah, it’s camping!” Vivien said. She munched on trail mix as if to accentuate her point.
Gertie sat up from the open back of the car with a groan. “Which is exactly why it won’t be fun! Bugs, plants, ground, ugh!”
“You want the ground to go away?” Vivien asked.
Bridget laughed as her older sister stuck out her tongue, and pulled the charred marshmallow off the clothes hanger to enjoy the melted goodness.
Gertie paused. “Can I have one of those?”


After a round of campfire songs led by Ernest and his ukulele, everyone settled down to sleep.
Gertie suddenly sat back up. “Does anyone hear that?”
“No,” Ernest groaned. “Go to sleep.”
Gertie lay back down. A handful of minutes later she sat back up. “Seriously, anyone?”
“Gertie!”
“No, wait.” Vivien sat up. “I can hear it too.”
A crunching sound floated over the cornstalks, the sound of feet stepping on gravel and stalks bushing to the side.
“It’s probably some small animal,” Bridget assured her. “Just put your pillow over your ears and go to sleep.”
Everyone lay back down.
A low groan came from the same direction, sending chills down Gertie’s back. She bolted to her feet.
Faye sat up. “That’s not an animal.”
Rabbits broke out of the cornfield and ran past the group, squealing in fear. Faye’s expression became one of horror.
“What are they saying?” Peter asked.
“There’s a monster coming!” Faye said, gathering her pillow. “It hates trespassers!”
The footsteps resumed, getting faster.
“It’s coming this way!” Gertie said, kneeling to roll up her sleeping bag.
A growling sound joined the footsteps.
“Let’s get out of here!” Vivien said, taking out her keys to unlock the car.
Suddenly everyone except Charlie was up, trying to gather what they had unpacked. Bridget climbed onto the bumper of the minivan, trying to get a view of what was coming.
Peter knelt next to his sleeping brother, struggling to wake him. “Charlie? Charlie!”
“It’s too late,” Bridget said, jumping down as she started to see the cornstalks close to them being pushed aside. Whoever was coming was almost here. She slipped on her Fairweather jacket that acted like armor whenever it was hit. “Fists up.”
Peter took a fighting stance and both faced the approaching stranger.
Gertie ran to the storage hat that held her entire hat collection. She threw her hand in and whispered, “Barrier.”
The hat shifted and when it settled, she pulled her arm out, now clutching a tall pith helmet in her hand. She dropped it on her head and experimentally twitched her fingers. Little bursts of light started in front of her palms. They grew outwards, creating sparking disks, until she ended the spell. She’d be able to deflect almost anything. She took a position in front of the others.
The group could now see a silhouette coming towards them. It sure looked human.
“Here we go,” Ernest said, sucking in a breath, preparing his whistling magic.
The shape broke into the clearing.
It came into the light of the fire embers, and Bridget and Peter forgot they were going to attack.
Its mouth was ragged stitching, its eyes black, mismatched buttons. Its clothes were misshapen farmer’s gear.
The scarecrow glared at the teenagers, and then its eyes locked onto the ostrich surrounded by devoured corncobs. It pointed a gloved, hay-filled hand and opened its fabric mouth to reveal the empty darkness inside.  “Make him stop eating my corn.”
The teenagers were all too shocked to answer, and the scarecrow huffed a breath that reeked with dirt and magic.
“I know. What? Scarecrows don’t talk!” it mocked, providing a point to the contrary. It grumbled. “How else do I do my job? Crows react to sound more than anything.”
“That makes sense,” Bridget finally said, trying to keep calm.
The scarecrow scoffed. “Don’t pander. Can you get your pet under control? Or do I need to call pest control?”
“He’s not our pet,” Peter said, still feeling his adrenaline from the would-be fight. “He’s our brother.”
Even without proper facial features, Bridget could see the doubt on the scarecrow’s face.
Gertie just nodded her head quickly. “Yeah, we will. He won’t eat another kernel.”
The scarecrow squinted its button eyes at her, but turned to go. “I’ll never understand humans,” it muttered to itself, marching back from where it came.
“I can’t believe it was just a scarecrow,” Bridget said with an awkward laugh.
Peter was having none of it. He kneeled next to his brother and started shaking him. “Charlie!” he whispered, in case the scarecrow was close enough to hear and come back. “Get up!”
It was no use, though. Even when they all tried to lift him, Charlie was just too heavy to get into the car.
“I think it’s safe to stay, as long as we all stay away from the corn,” Vivien said as she wrapped her blanket over her shoulders. “It’s nice out here.”
Her friends echoed the sentiment, and tried to relax as they set camp back up and returned to their disheveled sleeping bags. But try as they might, none of them could get to sleep. The fire crackling, the brush of the corn in the slightest breeze, even Charlie’s gentle snores made them jump.
“Okay,” Gertie said, rubbing her eyes. “I’m making hot chocolate.”
She pulled out a teapot and put it on the newly lit fire with water procured from their stash. As she mixed the hot chocolate powder into it, a sweet smell filled the clearing.
Charlie stirred from sleep and lifted his head, sniffing and looking hopefully towards the pot for a serving.
Faye all but shouted at him. “Really, that wakes you up?”