Gertie and Bridget do not get mauled by a gorilla 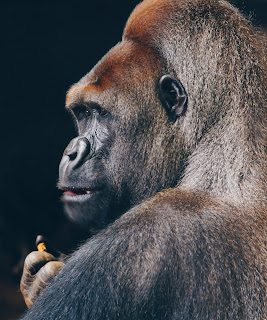 A huge brown gorilla stared down at Gertie, Bridget, and their friends, snorting wildly. There was nowhere they could go; the mammal blocked the path between the exhibits, and if they tried to turn and run it would surely catch them.
Someone was releasing all the animals in the Norvester zoo, but of course it was just their luck that they ran into something dangerous instead of a tortoise or flamingo or something.
“Don’t make eye contact,” Faye insisted, pulling her older brother Peter down by his shirt collar. “We don’t want to make her angry.”
Everyone jerked their heads down; Charlie’s ostrich neck bent in a U like a shower head, and Gertie took notice of the fake animal footprints in the concrete.
“Can’t you talk to it?” Bridget whispered. “You talk to animals all the time!”
“Ones I have the enchantment for!” Faye shot back. “I don’t…” she looked over her rings and bracelets and necklaces, and paused. “Okay, I’m going to hope that my monkey charm works, and if it doesn’t, we all need to be prepared to run.”
She stepped out in front of her friends and took a deep breath.
“Hi,” Faye said to the gorilla.
The brown primate snorted down at her, and Faye’s stance softened.
“Do not hurt us, please,” she said.
The gorilla fixed an irate stare at them. Then she made a grunting noise, and Faye sighed in relief.
“She says she’s not going to attack,” Faye translated for everyone else. “She’s upset I would even think she would.”
“You can understand her?” Ernest clarified.
Faye nodded. “It’s kind of broken speech, but it’s good enough.” She turned back to the gorilla. “What is your name?”
The gorilla snorted.
“Poppy?” Faye repeated, then thought better of rolling her eyes and insulting the gorilla. “Okay. Poppy.”
“See? Animals have silly names,” Gertie muttered.
“Ask her who let her out,” Bridget told Faye. “Maybe we can help the zoo find who’s doing it.”
Faye nodded. “Who let you out?”
The gorilla grunted.
“Bird?” Faye turned to look at Charlie, who hissed defensively. “I don’t think she means you.”
Poppy kept grunting.
“She just keeps saying ‘bird’,” she told her friends. “‘Follow bird.’”
“She must have chased a bird out of her cage,” Peter said.
A couple of zookeepers approached the gorilla from behind, holding tranquilizer guns. Gertie noticed them and shook her head frantically, trying to wave them off.
“Poppy,” Faye said, keeping the gorilla from turning to see what Gertie was looking at. “Back in cage?”
The gorilla shook her head and grunted and snorted.
“You are following the bird?” Faye clarified, and the gorilla nodded.
Poppy reared back on her hind legs, and the zookeepers raised their guns.
But instead of attacking, Poppy lifted her arm, almost pointing, and grunted again.
Gertie and Bridget turned, just in time to see a green and red macaw land on a lamppost behind them.
“Hey,” Peter said, stepping around the food cart underneath the bird to try to get closer to it. “Did someone let you out too?”
The parrot squawked and said, “Oram ebie.”
The lamp flickered and the lock on the side of the food cart clicked open, spilling unsalted soft pretzels onto the ground.
Without another word, the parrot landed and started tearing into the snack.
“Uh,” Gertie was at a loss for words.
“Did the bird…” Peter took a step backwards. “Did it just cast a spell?”
Charlie honked.
Faye sighed. “No, it actually spoke the spell because it’s a parrot. You just squawk, you couldn’t do it. That’s the whole point of you being trapped as an ostrich.”
Poppy made a noise of satisfaction and turned with a couple grunts.
“She says she’s going back to her cage,” Faye told the zookeepers, who were staring, slack jawed, at the parrot. “She says she’s hungry, and deserves some watermelon for this. One of you might want to turn the lock behind her.”
One of the zookeepers nodded and turned to follow in the gorilla’s wake.
The other employee finally found her bearings and kneeled in front of the parrot that was continuing to chew the pretzels into crumbs.
“Step up,” she commanded, holding out her hand.
Suspiciously, the parrot lifted one clawed foot and put it on the zookeeper’s fingers. She lifted him and he jolted a bit, but found his balance.
The zookeeper held her walkie talkie to her mouth. “Looks like Peanut might have been the cause of all this. Can we get Alton over to his cage?”
“Peanut?” Peter repeated.
“I told you it was a good name for a bird!” Gertie said with glee.
The group followed the zookeeper back to the zoo’s entrance, where they saw even more empty bird cages.
“Huh.” Bridget peered up into the shattered lamppost behind the empty cages, the same one they had seen a family accidentally break. A wave of pure magical energy washed over her and she backed away, feeling tingly. “That would do it.”
Gertie nodded. “The first time Peanut said the spell while there was magic leaking into the air, his cage door would just open.”
A man with the name tag “Alton” arrived, biting his bottom lip. “I can explain.”
The zookeeper, and the group, looked at him expectantly.
“I lost my keys a while back,” Alton admitted, fiddling with a necklace Bridget recognized as having stored magic power. “I know how expensive they are, so I just started using a charm to unlock the cages and lock them again. I didn’t think any of the animals would learn them!”
“Good morning!” Peanut cawed.
“Right, how could you have seen this coming?” the other zookeeper said dryly.
Peanut screeched. “Treat?”

The group spent the rest of the afternoon helping the zookeepers. While nets and tranquilizers could get the job done, the staff found it easier to have Faye or Ernest use their animal handling abilities to calm down their charges and bring them back into their care.
Marcus, the first zookeeper they had proposed this plan to, arrived at the bird cages and announced he would be taking them around.
Faye’s eyes went wide as they were taken behind the scenes through the park.
When she didn’t have a charm to speak to a giraffe, Marcus quickly found a gift shop to get her a charm bracelet.
She took a bit of the giraffe’s tail hair and pulled out a small bottle of an orange potion from the pocket of her dress. She dabbed a bit of the potion onto one of the charms, and laid the giraffe hair on top.
She held her hand over the charm, potion and hair, and spoke a complicated spell in a language Gertie didn’t recognize.
Using her magical eye, Bridget could see the power that Faye was using. “I thought the ostrich charm for Charlie was a one-off thing,” she said. “I didn’t realize this was something she just...did.”
“That’s my sister,” Peter said with a proud grin. “She’s the most powerful of the three of us.”
There was a sizzling noise and when Faye lifted her hand, the hair was gone, and Bridget could see the giraffe translation enchantment glittering on the charm.
As more escaped animals were found, Marcus took the group all around the zoo. Ernest whistled a melody that entranced a cheetah, Faye held a conversation with a platypus, and Charlie told the ostriches in his own tongue that they should return to their pen.
“I’ve never seen anything like it,” Marcus told Gertie and Bridget as he watched a koala peacefully climb down from one of the zoo signs into Faye’s arms.
“He says his eye is starting to hurt,” Faye told Marcus as he locked the koala away. “I’m sure you know what that means. You should get a veterinarian on that quickly.”
Using his music, Ernest managed to call all the parrots at once back to their cages, which had been opened when Peanut started the whole mess.
Until the lamppost was fixed, Peanut wasn’t being put back in his exhibit. He needed to learn that saying the spell wouldn’t release him anymore.
As they headed out of the zoo, Marcus led the group to the ticketing office.
“We’re giving you lifetime memberships to the zoo,” Marcus said. “Please, come back whenever you want. If you want special tours, just ask. We can’t thank you enough for all the time and effort you saved us.” Then he made eye contact with Faye. “And as soon as you want a job in zoo management, please apply with us.”
At the end of it all, Faye had nine translating enchantments on her new bracelet.
“Best zoo trip ever,” she declared as she stared out the window.
As the countryside sped by, Gertie removed the egg’s box from her backpack and opened it up. The egg was thrumming as if in excitement from all the nearby animal activity.
“So…” Gertie said as they drove. “Can we name the storm owl ‘Shelby’? Because eggs have shells?”
Bridget sighed. “Fine.”