Gertie and Bridget hit the road 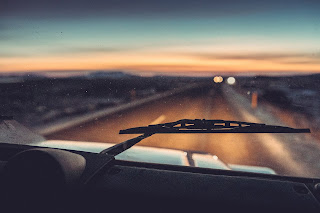 “What did you do?” Vivien screamed from the driver’s seat as the tornado bore down on them.
“I don’t know!” Gertie stared at the phosphorescent statue sitting in the open box on her lap and back to the tornado. “It just started glowing!”
“Well, find a way to make it stop glowing!” Ernest shouted. “Before we get blown off the road!”

“Whoa!” came a shout from Bridget’s room.
“What?” Gertie yelled back, curled up on her bed and listening to one of her favorite CDs. If there was one thing she loved about the summer, it was being back home listening to all of her music, sleeping in her own bed, and keeping cool in the central air conditioning.
“Look!” Bridget barged into Gertie’s room and shoved the laptop under her nose.
Gertie took it from her and began reading the email on the screen.
“That guy who bought that weird rock statue? He still wants it!” Bridget said.
Gertie frowned. “I thought we weren’t allowed to mail it.”
The sisters had bought a box of assorted magical paraphernalia at a yard sale and were selling anything they didn’t want to keep. The statue was one of the more unusual items, and when it had been purchased in an online auction they set up, they brought it to the postal service to mail to the winner. Unfortunately, the workers had run it through a magical scanner and deemed it too powerful to ship. So Gertie and Bridget had apologized to the Mr. Farwell of Delliflor who had outbid everyone else for the statue, and re-posted the entry to be bought by someone within easy driving distance of the city.
Or so they had thought.
Gertie whistled as she read the email. “That’s a lot of money.”
“Part of it is so we can rent a car and drive out to meet him,” Bridget said. “He’s also covering any expenses we have.”
“He really wants the statue.” Gertie looked over to the cardboard box holding the stuff from the yard sale.
The statue itself seemed unremarkable. It was nothing more than a gold perch for a potato-sized, polished, black and green rock. It was definitely magical, as Bridget’s enchanted eye could attest, but they couldn’t for the life of them figure out what it did.
“And he wants it in the next week,” Bridget finished, collapsing back into Gertie’s desk chair.
“What do you think?” Gertie asked.
Bridget shrugged. “I mean, it’s not like we have anything else to do before school starts up.”
“Do you think Mom and Dad will say it’s okay?”
“There’s only one way to find out.”

“So we’re leaving tomorrow,” Bridget announced to Vivien, a wide grin on her face. The sisters took the train down to Flories Boarding School to have lunch with their best friend Vivien Shew once a week or so, though they would have to put that on hold now with their upcoming road trip.
Vivien smiled, but it didn’t seem to reach her eyes.
Gertie tilted her head to the side in concern. “What’s the matter?”
“Nothing,” Vivien insisted.
“Viv, don’t try to hide it,” Gertie said.
Vivien slumped. “I didn’t get into the class,” she admitted, her accent making it hard to understand when she spoke so softly.
“Oh, I’m so sorry.” Gertie reached her hand across the cafeteria table to put it on her forearm. “Did they tell you why?”
“Class sizes.” Vivien frowned. “Apparently, Intro to Necromancy is a very popular class at Wespire University, and fitting in a high school student isn’t their priority.”
“That sucks,” Bridget said.
“Hey!” A grin spread across Gertie’s face. “That means you don’t have any plans until the school year starts!”
“Thanks for reminding me,” Vivien said, clearly not getting Gertie’s point.
“No! Come with us!” Gertie said. Bridget nodded in agreement. “This is so much better! You have a car.”
Vivien smiled at that. “Yes, I do.”
“If you come with us, and you let us take it, then we don’t have to rent one.”
Vivien drummed her fingers against her chin in a big show of pretending to think it over. “That sounds wonderful,” she finally said.
“What does?” Faye Nessing stopped at their table. She was another Flories Boarding School student who was staying on campus over the summer.
Behind her stood an ostrich whose small head was over two feet above Faye’s. Her older brother, Charlie, had been allowed to stay out of juvenile hall and finish his last year of high school, but in exchange, the courts had decided he should remain in the shape he had accidentally turned himself into while illegally trying to transfigure someone else. So, until his eighteenth birthday, he was an ostrich, and, as such, unable to use his magical abilities.
“A road trip,” Bridget explained. “We’re selling a magical artifact and it can’t be shipped.”
“Wow,” Faye said, sitting down without being invited.
Charlie squawked.
“Quiet,” Faye told him. Using charms found on her various pieces of jewelry, she was able to understand the language of many different types of animals. After Charlie had transformed himself, she had added ostriches to that list. “Can we come?”
Charlie reached his head down and tapped her on the shoulder with his beak.
“Hey! I’m not being rude, I’m just asking!” she protested.
Bridget smiled. Gertie looked at Vivien, wondering if she cared about the smell of ostrich in her minivan, or more importantly, if she wanted to spend any amount of time with the guy who tried to turn her into a bird.
Vivien stared at the table, not sure what to do. Through Faye, Charlie had apologized earlier in the summer for his actions. They would never be friends, but there wasn’t any lingering hostility.
Vivien closed her eyes, took a deep breath, and forced a smile.
“The more the merrier,” she said.

***
The Mallon girls climbed into the purple minivan parked outside their parents’ house, only to find it much more crowded than they had thought it was going to be.
“Hey guys, thanks for inviting me,” Ernest Yilnog, sitting in the front passenger seat, said with annoyance in his tone. He had graduated Flories Boarding School the previous year, and was now living with the eldest Nessing brother, Peter. Peter was starting his first year at Wespire University and was also sitting in the back seat next to his sister.
“I might have mentioned to Peter that we were going on a road trip and he and Ernest decided to tag along,” Faye said. Charlie stuck his head between the two of them from his blanket, pillow and suitcase nest in the trunk of the minivan and honked. “I did not invite them! They just...I felt bad that we were going to leave them behind.”
Gertie laughed. “It’s ok, this will be great!” She climbed into the middle row of seats with Bridget. “We have Ernest’s music collection now.”
Ernest stopped bristling and reached for the auxiliary cable to start up a playlist.
Bridget buckled in. “So, we have the first half of the payment from Mr. Farwell. We’ll find motels to stay at, drive-throughs to feed us, and grocery stores that sell seeds by the pound on the way.”
Charlie squawked in thanks.
“Everyone ready?” Vivien asked.
Gertie looked down at her lap. She and Bridget had cut out styrofoam that fit around the statue nicely and put the whole thing in a box to make sure it didn’t get damaged as they drove.
“Let’s go!” was the cheered response.
Vivien hit the magical autodrive button, and the car sprang to life, waiting for instructions.
“Green Grass Inn, 14 Crossing Road, Maple Hills, Arvendry,” Vivien read from Bridget’s phone to the car.
On the right side door and the back, Vivien had painted her car with chalkboard that let her write and draw. As the minivan pulled away from the Mallon house, anyone glancing in its direction would see large, block letters that spelled out “ROAD TRIP!”