Gertie and Bridget go to a yard sale 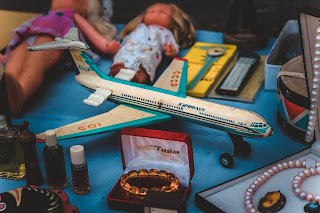 “Ten dollars,” Bridget said, countering the man’s offer.
He sighed. “Fine, take the jacket.”
Bridget pulled the bill out of her wallet and handed it to the man. She slipped the Fairweather jacket over her shoulders, smiling as it magically lengthened and grew to fit her, since its previous owner had clearly been much more petite. The material reacted to the sunlight, making the gray shimmer in blues and greens. It was quite the find, after digging through the large boxes of clothes where everything was marked as “name your price.” Bridget loved going to yard sales.
Gertie looked through the potted plants sitting on a plastic folding table. She shifted aside the vines and leaves in search of stickers denoting prices, only to find the names of the plants instead. Her mouth popped open in a gasp, and she picked up one of the plastic pots.
“Is this a milkberry vine?” she asked the man running the sale.
“I don’t know.” He glanced over it. “I’ll give it to you for three dollars though, since it’s so tiny.”
Gertie looked dumbstruck. “Don’t you… but it’s a milkberry vine!”
“My family tasked me with selling what they wanted to get rid of,” the man said, typing numbers into a cash register and putting Bridget’s bill in. “If they didn’t put a price on it, or mention one to me, it’s on them.”
That was good enough for Gertie. “Sure. Three dollars.”
She passed the pot to her sister and pulled out her new wallet to pay.
Bridget staggered under the weight - the plant was much heavier than it looked. It was barely more than a thick central stem with a few small black and purple flowers. The man was right; it didn’t look like it was worth much.
“Can we go home?” Gertie said, excitedly taking the pot back from her sister.
“Yeah, let’s-”
“Wait,” the man stopped them. “You seem interested in magical things. All the furniture’s been sold, and I can donate the clothes, but these are all useless to me. You want them?”
He held out a cardboard box. It contained several small boxes, some jewelry, a few books, and other random items. One thing was clear, through Bridget’s enchanted eye that let her see such things: every item was somewhat magic.
“How much?” Bridget asked hesitantly.
The man sighed. “Fifteen for the whole box?”
“Deal!” Gertie said, putting down her new plant and pulling out her wallet again.

***
Even before she turned on her light, Gertie knew something was amiss. Her room just didn’t normally smell that sickeningly sweet.
She reached for the switch hesitantly, steeling herself for the worst.
“Oh,” Ernest said, bumping into Gertie when she didn’t walk farther into the room.
“Well, it looks healthier now,” Gertie said.
The milkberry vine was no longer solitary. It had spread tendrils from its spot on Gertie’s window sill, down the wall and up her bookshelf. It had almost reached her bed.
“Hopefully that’s the worst of it,” Gertie said. She picked up her pruning shears next to her plant pots, shaking a few leaves off of them, and began clipping away the flowerless vines.
“So.” Ernest shifted awkwardly. “I guess I’m not getting the growth potion after all?”
Gertie shook her head. She had to deal with the plant. “Is tomorrow ok?”
Ernest nodded and left his hallmate to her task. Gertie spent the better part of an hour cleaning up the fallen tendrils and leaves, but by the end of the night she had her little milkberry vine back.
She changed, turned out the light, got in bed, and settled in to fall asleep.

When Gertie woke up, she found she’d been mummified.
It was a bit like opening up her eyes to find her worst nightmare had come to life. She fought against the urge to scream, and tried to sit up.
It took a bit of struggling, but the tangled vines that had grown over her in the night shifted aside, and Gertie took a deep breath.
The plant looked like it had exploded. Every place she had clipped a tendril, two more, thicker, longer ones had taken its place. Half her room looked like the corner of a greenhouse now.
Gertie grumbled. It was far too early for this.
She went to her computer, brushing off more plant matter, and started researching milkberry vine care.
“I brought you some - what the-?” Bridget stopped at the door, rendered speechless by the sight.
“Yeah, so,” Gertie said, still staring at the computer. “It turns out that milkberry vines are notoriously hard to take care of. If you cut it wrong, or cut off any of its tendrils, it just grows another shoot. And the tendrils are useless - only the center vine grows flowers and berries.”
Bridget moved closer to Gertie, setting down the to-go cup of tea she had brought her.
“Thanks,” Gertie said and took a long gulp.
Ziggy, leaving Bridget’s side, sniffed at the plant, trying to figure out what it was doing and how it got there.
“I apparently need to get some Cautopiary potion to brush on after I cut the smaller vines,” Gertie said. “Otherwise this’ll just happen again.”
“Well,” Bridget said. “Let’s go get some then.”

***
“Wow, look at this,” Vivien stepped into Gertie’s dorm room gingerly, her west-Crescyth accent hard to mistake. “It’s almost impressive.”
“You’re not helping,” Ernest said. He had removed his beanie from the heat of the physical labor involved in bending and clipping off vines and brushing on potion for hours, and they could now see what looked like a five o’clock shadow on his head.
“Sorry,” Vivien said. “How can I be of assistance?”
“Take this.” Bridget handed her a garbage bag full of vines and leaves. “And walk it down to the dumpster.”
The vine had lost most of its tendrils, and there was no sign of them coming back, thanks to the potion.
“Hey!” Gertie pulled a white berry from underneath some leaves, holding it up triumphantly. “Our first milkberry!”
“Nice!” Vivien said. Bridget and Ernest exchanged a look of frustration and got back to work. How could Gertie be so excited when they still had so much to do?
Gertie held the berry like a treasure. “I’m going to save this one-”
“Ouch!” Ernest held up his finger, a large gash in the side from where he had accidentally clipped it.
It was bleeding.
Gertie sighed. “Here.” She handed over the milkberry. “Eat it.”
Ernest looked at her hesitantly, took the milkberry and popped it into his mouth, chewed, and swallowed. He held his finger up again.
The four students watched as the cut slowly stitched itself together, leaving nothing but a drop of blood to signal that anything had been wrong in the first place.
“Well, that was-” Ernest paused and frowned. He reached up and started scratching at his head.
Before long, his fingers were getting tangled in hair. His own hair.
“...Awesome.”
With the last of the milkberry’s powers, Ernest’s hair had returned to its normal length.


“Well,” Bridget said. “Looks like you got your growth potion after all.”