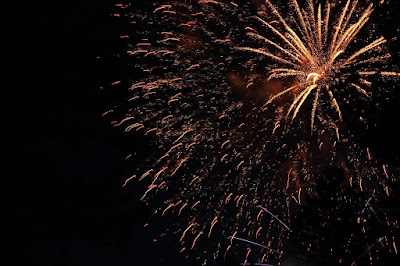 
***
“Hey boy, I brought you something,” Gertie said, holding the ghostclover out. From under the statue of a scientist on a bench in the middle of Spacer Park, they could hear a sniffing noise. Ziggy’s nose appeared, and then the rest of him, as he rubbed his head against the weed.
He loved this statue. When the girls came to watch street performers, he’d spend all his time hanging in the shade underneath the bronze bench.
“Ziggy!” Bridget reached down to pet him. Her hand phased into his fur instead of brushing through it, but his eyes closed in joy the same way they had when he had been alive.
Are the fireworks over? Gertie texted their friend Vivien.
Just had the grand finale. You might even make it back by curfew if you hurry.
“Let’s go home,” Gertie said.
Ziggy yipped in agreement.


***
“Ok, let’s try this out.” Gertie held up the thunder jacket she’d enchanted using the ghostclover she had been growing in a terracotta pot on her windowsill. She wrapped it around Ziggy, buckling it under his belly. It stayed in place instead of falling through his ghostly body, and his front legs shifted to fit in the armholes.
Ziggy ran around in a circle, and the jacket stayed with him.
“Yes!” Gertie spun around in her computer chair in triumph.
“Nice work,” Bridget said from Gertie’s bed.
Ziggy ran up to her, showing off his new jacket and barking excitedly.
“I can make him toys now!” Gertie said excitedly, her mind whirring over the possibilities. “And gloves to really pet him with! And a leash! We could actually walk him, and play fetch, and-!”
There was a boom and blue and green lights flashed through the window. The Falcons had managed to get to the finals.
Ziggy whimpered and headed to the door. But instead of flying through it, his jacket, corporeal as it was, held him back. His legs scurried, trying to run, but he was stuck in place, looking headless to the girls.


“It’s okay, Ziggy.” Bridget stood and picked him up by the jacket to carry him back to the bed. “We’ve got you.”