Gertie and Bridget return from holiday

Continued from Gertie and Bridget go on holiday 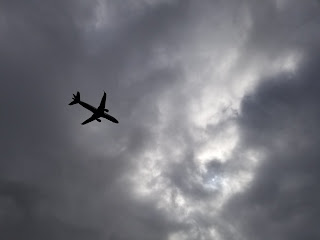 “It’s just an x-ray, Bartholomew, be quiet!” Bridget hissed at the ghost possessing Gertie. Her sister, or rather Bartholomew, let out a frustrated huff.
“It’s so strange...” he said, staring at the screen that was revealing the contents of checked luggage. The agent weighing and taking their suitcases raised his eyebrows, but didn’t say anything.
“This is a terrible idea,” Eloise, Bridget and Gertie’s mother, murmured. Theodore, the girls’ father, was in the bathroom but could come back at any moment. He knew nothing of the sisters’ plan to get Bartholomew to the mainland, and if he did there was no way he’d approve of his daughters using magic to do so.
Using a ghost therapy hat that contained his spirit and allowed for safe possession, Bartholomew was walking around using Gertie’s body, gaping at cars, marveling at skyscrapers, and staring bug-eyed at airplanes as they descended into the airport.
Somehow, Theodore hadn’t noticed the odd behavior yet.
“Alright, ready for security?” Theodore asked on his return, clapping his hand on Gertie’s shoulder.
Bartholomew flinched, unused to how such a thing would feel in a human body.
“What?” Theodore jerked back, hurt.
“Just sunburn, dad,” Bridget said.
Bartholomew nodded Gertie’s head and rubbed the shoulder demonstratively.
Since they were leaving the state of Lucembrine instead of entering, they didn’t need to enter a special line to declare magical items as they had on the way in. Lucembrine was very strict about magical use, much more than in the rest of the country. The family of four, plus a ghost, merely waited in line, placed their items on a conveyer belt to be x-rayed, and walked through a metal detector.
“Excuse me, miss?” A security agent held out her hand to stop Gertie.
“Uh…” Bartholomew was still getting used to the fact that he was in a female body, and would be referred to as such. “Yes, ma’am?”
“Your hat?”
“What?”
“Place your hat on the conveyer belt.”
Bartholomew shot a look toward Bridget, but she nodded. It’s not like they had another option. Bartholomew removed the hat.
Gertie instantly regained control over her body. It felt like she had suddenly been jolted from a dream, and she was a bit disoriented.
The security agent was getting annoyed. “Please place the hat on the conveyer belt and continue through the metal detector.”
“Of course.” Gertie put the hat down and watched as the ribbon turned from white to gray, signalling that Bartholomew had left the hat. “Sorry. I’m a bit sleep deprived.”
She stepped through the metal detector without incident, and picked up the hat and her carry-on again.
Once they reached their gate, and their parents had settled into seats to wait, Bridget cleared her throat.
“I have to go to the bathroom,” she said pointedly.
“Me too,” Gertie said. “Let’s go.”
If Theodore thought it was strange that Gertie brought her hat with her and left her backpack, he didn’t comment on it.

Theodore and Eloise waited, growing anxious as announcements were made of the plane’s impending departure.
“They’re taking a while in there, aren’t they?” Theodore asked.
Suddenly, the girls came running back, panting, Gertie with the enchanted hat back on her head.
“The bathroom was just around the corner, wasn’t it?” Theodore asked suspiciously.
Gertie and Bridge glanced at each other, having just had to search the entire area near security and the surrounding gates before finding Bartholomew invisibly staring at a vending machine in wonder.
“I had too much coffee,” Bridget finally mumbled, staring at the ground.
Theodore threw up his hands. “I don’t need to know anymore.”
At the same time, Gertie and Bridget’s phones started buzzing.
“Oh, Ernest posted a new song,” Bridget said, clicking on the notification. A video of Ernest performing with his guitar popped up, and Gertie’s eyes nearly bugged out of her head.
“How is that…?” Bartholomew stumbled over his words, remembering that Gertie’s parents were still present.
Bartholomew-in-Gertie pulled her phone from her pocket, staring at it. He clicked on the notification to reveal the video, like Bridget had. He touched the phone and the page took that to mean he wanted to scroll, and Bartholomew found himself looking at the handful of responses to the video. Most of them were negative.
Gertie sucked in a breath.
“Such language!” Bartholomew said.
Bridget laughed nervously. “Nothing we haven’t seen before, though,” she added awkwardly.
Theodore narrowed his eyes at his daughters, but the boarding process began, and he and Eloise started paying attention to that instead.
“What else can this magic thing do?” Bartholomew asked, holding the phone up in front of Bridget.
“It’s actually mostly not magic,” she said. “Science has come a long way.”
Bartholomew’s eyes widened, and the Mallon family’s section number was called.
“Let’s go!” Eloise said, grabbing Theodore’s hand to lead the family shoving past other passengers on their way to the line.
Gertie looked queasy as the family got closer to the door to the ramp, and by the time she reached the front of the line and handed over her ticket, her forehead was visibly glistening with sweat.
“Are you alright, miss?” The flight attendant asked.
“Yes!” Bartholomew blurted. “I am fine. There’s nothing wrong.”
“Are you sure?” The flight attendant paused in handing back the ticket.
Bridget put a calming hand on Gertie’s shoulder.
“She’s just a little nervous about flying,” Bridget said. “Once we get on the plane, she’ll be fine. She falls right to sleep.”
The flight attendant seemed to think that was good enough, and let the family board.
Gertie sat in the window seat, hugged her knees to her chest, and started a low whine.
“Gertie!” Bridget hissed. When Bartholomew didn’t answer, she elbowed her. “Bart!”
“Why am I doing this?” Bartholomew moaned. “What if it doesn’t work? I’ve never, ever left Lucembrine, not even when I was alive!”
Theodore settled in next to the girls before Eloise could stop him, and noticed Gertie’s vulnerable state.
“What’s the matter?” he asked. “Are you feeling okay?”
Gertie nodded, but she wasn’t fooling anyone.
“You haven’t had problems flying in years,” Theodore said, reaching over Bridget to put a hand on Gertie’s arm. “It’s going to be okay. It will be over before you know it.”
“Thanks...Dad,” Gertie said.
“If you’ll all put your seat backs and trays in their upright and locked position, and turn off any electrical or magical devices, we’ll be taking off shortly,” came a voice over the PA system.
“Where did that come from?” Bartholomew mused, staring at the ceiling of the plane in confusion.
Theodore opened his mouth to ask about the strange question from his daughter, when Eloise animatedly gestured to the screens they had on the back of the chairs in front of them from across the aisle. “Look Teddy! They have free poker! Let’s play!”
Gertie was all but hyperventilating as the plane began rolling away from the gate. “What if I get left behind?” he whispered to Bridget.
She didn’t have an answer for him.
The engines began to growl, and Bartholomew held his breath.
The plane started racing down the runway, and Bridget gripped Gertie’s hand.
The aircraft lifted, and they were flying over the land. When they crossed the ocean, they would have their answer. Gertie and Bridget anxiously looked out the window, watching as the plane left the airport and was over the ocean.
As soon as the glimmering blue shone up at her, Bridget turned to stare at Gertie, waiting for something to happen.
Gertie looked down at the ocean, and up at her sister.
“It’s working!” Bartholomew whispered. “I’m still here!”
The girls hugged in triumph.
Theodore smiled over at them.
“It really is nice that they’re so close,” he mused to Eloise.
She just nodded. “Full house,” she said, pointing at the screen again.

It was a six hour flight, and before long the Mallons had all fallen asleep. All except Bartholomew. There was no way he was missing a second of it.
Bartholomew nudged Bridget awake as the plane started to descend. “Something’s wrong with her ears!” he whispered.
Bridget yawned. “It’s just the change in altitude. You’re fine.”
“So your sister’s not dying?”
Bridget shook her head.
“Oh. Alright then.”
The plane touched down with a rumble. They taxied into the gate, and Bartholomew was almost jumping up and down in the chair. He was going to see his family again! He fixed the image of the map that Bridget had shown him in his mind. He would find them.
The family shuffled off the plane, all sore and tired.
“Can I go to the bathroom?” Bridget asked.
“Can’t you wait until we get home?” Theodore countered.
Eloise nudged him. “It’ll only take them a few minutes.”
“Them?”
“I have to go too,” Bartholomew-in-Gertie hurriedly said. They headed toward the nearest bathroom.
After making sure it was empty, Bridget stood against the door to allow for privacy.
Bartholomew turned to face her.
“I will never be able to thank you and your sister enough,” he said. “Can you please pass on my sincerest thanks to her?”
“Of course.”
Bartholomew nodded.
“Goodbye.” He put both of Gertie’s hands on the brim of the hat and pulled up.
Gertie blinked. The last thing she had known, she was back in the airport using the incantation to get Bartholomew back into the hat.
“That’s the way to travel,” she murmured to herself.
Bridget watched Bartholomew wave, smiling. He walked through the wall of the bathroom, heading west toward where his family was.
“Uh, Bridget?”
“Yeah?” Bridget turned toward her sister, glad to have her back.
“Is it ok if I actually go to the bathroom?” Gertie asked. “It was a really long flight, and I don’t think Bartholomew remembered how.”