Gertie and Bridget go on a tour 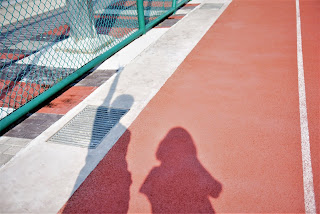 As Gertie and Bridget were walking from breakfast to their first classes, they were greeted with a group of teens and adults blocking the path between buildings.
“Oh great,” Bridget said. “A tour.”
Most prospective students to Flories Boarding School would fly out for a day of pre-scheduled activities designed to make the campus an attractive alternative to normal day schools. For the teens, the freedom angle of the dorms was played up, while reiterating curfew and the presence of residential advisors so the parents would approve.
Bridget and Gertie groaned, trying to get around the group and being blocked at every turn by a parent taking pictures or a younger sibling getting distracted by a row of flowers, a statue or an ivy covered building.
“Are there any magical clubs here?” a boy with a curly mess of hair and thick rimmed glasses asked the tour guide.
Gertie almost stopped, but Bridget found an opening between a set of families and pulled her through.
“No,” the tour guide said. At the boy’s obvious disappointment, she recovered quickly. “But there’s nothing stopping you from starting one!”
“That won’t be necessary,” the boy’s father said, and his mother nodded grimly.
Gertie frowned as they left. Another magic aficionado whose dreams were crushed by their parents.

In the middle of Bridget’s advanced calculus class, the tour group squeezed in, filling the entire front corner of the class by the door and spilling back into the hall.
“Hi Mr. Terkin,” the tour guide said. “Sorry to interrupt.”
“No problem, Lauren,” Mr. Terkin said.
Bridget took a deep breath to hold in a sigh. She put her pen down and prepared herself to have to study this weekend for the midterm, since the teacher was obliged to turn his attention to the visitors.
Tour group season was the worst.
“Did any students have questions about mathematics, or any classes here?” Lauren asked the group.
“Or the swim team. I’m the coach,” Mr. Terkin added.
One of the tour group members perked up. “When are tryouts?” he asked. He was tall and lean, with tan lines around his eyes that Bridget had assumed were from sunglasses. Swim goggles would also make sense, though.
“Two weeks, just after the new quarter.”
The rest of the prospective students asked about things like class sizes and available electives.
“Next period there’s an acting class,” Lauren said, gathering her flock to leave the classroom as the bell rang. “I can take you to look in.”
I’m sure they won’t mind, Bridget thought, packing up her bag.

During their weekly afternoon assembly, Headmistress Clearwater was talking about voting for the school dance in the middle of the next quarter and Bridget noticed the tour group slipping into the back rows. Of course they’d want to see the headmistress in action.
As Gertie, Bridget and their friend Vivien left the assembly, they passed one family in particular talking to the tour guide and Headmistress Clearwater. In it was the boy with glasses who had asked the question about clubs, the swimmer from Bridget’s class and a girl who was apparently their sister, based on the family’s curly brown hair and large ears. Bridget immediately noticed, with her magic eye, that every bit of the girl’s jewelry - from her multiple pairs of earrings to her three necklaces and multiple thin bracelets - was enchanted with spells. The only one she recognized was the charm on her necklace to be able to communicate with dogs.
“All of our teachers stress responsibility when it comes to magic,” the headmistress was saying. Catching Vivien’s eye, she smiled. “Maybe these students could talk to you about it?”
The three siblings and their parents looked over. Vivien flushed in embarrassment at the reference to her past mistakes.
“Sorry, we’re late for study group,” Gertie lied, glaring at the headmistress. The three girls hurried away, not looking back.

After dinner, the sisters were on their way to the lit, outdoor basketball courts for Bridget to get some reverse layup practice in outside of her normal team practice. They passed the student center on their way; the tour was letting out after the special dinner for prospective students, where teachers were in attendance to answer any questions, have one-on-one conversations with the parents, and eat a free steak dinner. Gertie and Bridget stopped to watch the group split into individual families who headed toward the parking lot by the woods.
“Finally,” Gertie said, still annoyed at the tour’s presence during her lunch period.
“Maybe those practitioner ones will come back,” Bridget said, dribbling the ball in place as they watched. “It’d be nice to have more people with magic here.”
Gertie just shrugged, stole the ball out from under Bridget’s hand and ran for the court without dribbling.
“That’s traveling!” Bridget shouted, jogging to catch up.

A week later, Gertie, Bridget, Vivien and Ernest were heading to movie night when they noticed a disturbance in the alley between Gertie’s dorm and the building next door. It was a favorite spot for bullies, as Gertie, Bridget and Ernest knew all too well, due to the close quarters and the lack of light.
“We should go help whoever it is,” Bridget said, stretching out her shoulders in preparation for a fight.
“All right,” Gertie grumbled, not having a hat with a useful enchantment for this situation on her.
Ernest pulled his piccolo pieces out from his backpack and started putting them together. His music-based magic came in handy during fights; sometimes he was even able to freeze the fighters in place. Vivien took a deep breath, trying to call up the self defense moves her gym class had instilled in her.
As they rounded the corner into the alley and their eyes adjusted, they were met with a surprising sight.
The bullies had surely been the ones to jump the new students, but they were the ones getting pummeled. Bridget and Gertie immediately recognized the new students as two of the siblings from the tour group.
The tall swimmer dodged a punch from one of the bullies - Jodie Migaran, one of Bridget’s least favorite teammates - but still caught her knee in his side. He recovered from the impact, reached up, grabbed Jodie, and shoved her against the wall with lightning fast speed that could only come from a spell. Jodie ducked as he curled his fist for a blow and he ended up punching the wall.
He groaned in pain, holding his hand up to reveal broken fingers. But as Gertie and Bridget watched, the bones righted themselves, healing in a matter of seconds.
Jodie jumped and kicked at his ribs, sending him into the opposite wall. She stood panting for a moment, while Nick Coffer - another bully well known to Bridget, Gertie and Vivien - started punching his face. The swimmer jabbed Nick in the gut, sending him gasping for air, and ran to tackle Jodie. He slammed her into the opposite alley wall.
When she landed, the bricks of the alley shifted and twisted into branches that reached out to curl around her.
“Hey!” she shouted, being pulled against the wall.
Gertie looked for the source of the magic, and caught the boy with the glasses waving his hands and casting spells in a magical language unfamiliar to her.
Nick ran toward the caster, trying to break his focus on his magic. Instead, he fell foot first into a deep shaft of water, courtesy of the brother’s magic changing the ground into liquid.
Two of the bullies’ friends ran away after that, one nursing a bleeding nose and the other having had his baseball bat turned into a long loaf of bread.
Satisfied that he wouldn’t be attacked again, the caster reached into the water, pulled Nick halfway out, and pricked a hair from the bully’s head. He unceremoniously dropped Nick back in after he managed to get a few gasping breaths.
The boy with the glasses then moved on to Jodie. After making sure her hands were secured by the branches, he plucked one of her long blond hairs and took a step back.
“Listen to me carefully, so you can tell your friends,” he said, speaking calmly, like this happened all the time. “I’m going to use these to cast a spell on my brother and me. If you try to hurt either of us again, anything you do to us will happen to you too.”
Jodie struggled against the branches.
The caster pocketed the hairs and backed away. “You can try to convince some other friends to try, but…” He stepped aside to reveal Nick thrashing to the surface of the shaft.
Jodie broke free of the branches and reached into the water. She pulled a gasping Nick up, soaking herself in the process.
“I’m alright,” Nick said through chattering teeth.
Jodie helped Nick stand, and together they limped past Gertie, Bridget, Vivien and Ernest, not even sparing a glance in their direction.
The brothers looked at each other for a breath and then at Gertie and Bridget’s group.
“Hi,” the boy with the glasses said. “We seem to have gotten lost.” He smiled, which somehow made Bridget feel all the more uneasy. “Any chance you can point us to the Meirgorge dorms?”
Gertie’s mouth opened and closed, still surprised by what she had seen.
“Sorry,” he said, running a hand through his curly hair. “We should introduce ourselves. I’m Charlie Nessing, and this is my older brother Peter. We’re just moving in.”
The swimmer nodded and held up his hand in a wave. It moved like it had never been broken.