Gertie and Bridget go to the beach 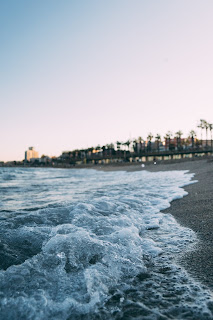 It was a hot day.
A sticky, sweaty, miserable day in Lucembrine where sunlight blared and sources of shade were few and far between. An afternoon where the asphalt seemed to sizzle, concrete blinded pedestrians, and door handles fried anyone silly enough to touch them.
It was the perfect day, according to Gertie, for the beach.
Gertie and Bridget’s parents were off at a wine tasting, a common tourist tradition in Lucembrine, while Bridget and Gertie had walked down the beach outside their rented cottage to a nearby boardwalk.
Gertie took to the ocean as fast as she could. She was wearing an enchanted swim cap that made her able to hold her breath longer, and she was off flaunting that ability and exploring some cave nearby.
Bridget, meanwhile, had suffered a severe sunburn the previous day of their vacation and was still feeling it on her back and shoulders. Instead of exposing herself, she sat on one of the wooden benches next to the row of shops on the boardwalk. She had a book that Gertie had lent her open on her lap, a big floppy hat that Gertie had insisted she wear (“It’s enchanted to protect you from the sun!”) on her head, and wore long shorts and a cardigan over a tank top to cover the burn.
She wasn’t reading the book though. She was staring out at the ocean, watching it sparkle. Her ruined eye, unable to see normally since she was a child, could see many things it shouldn’t. Ghosts, hidden doorways, and past the magical things people used to seem more glamorous in this setting, where they were on display. Sunscreen that gave the appearance of a perfect tan. Hair spray that formed perfect, luscious waves. Swimsuits that cast an illusion of a more fit body were the most popular.
There was also a giant sea monster in the distance, hiding under an invisibility spell among the ocean waves. Its giant eyes stared at the shore. Bridget was trying to figure out if its intentions were sinister. Most magical creatures respected living beings that weren’t their natural prey. But sometimes there was a rare exception.
Something invisible appeared out of the water, and Bridget gasped. It was a little sea monster. Two tall eyestalks with tiny blinking eyes, a small squishy body and lots of tentacles. The larger monster must have been watching out for it. It scurried from the ocean and up the beach, dodging any feet that came its way.
Bridget watched with rapt attention. As it got closer, Bridget realized its destination.
An ice cream shop. It was a bar, with a green and yellow awning protecting it from the elements. The last parent and child pair in line had just been helped, and the young sea monster was heading right for it.
Discreetly, Bridget put her book in her bag and stepped up behind the monster.
The shopkeeper didn’t seem to notice the little creature, for all that it was hopping up and down, waving its tentacles, trying to get her attention. Bridget hoped that the owner did know the monster, and she wasn’t about to do something incredibly stupid.
Bridget knelt just behind the invisible monster.
“Excuse me,” she said, after making sure no one else was around. “Would you like some assistance?”
The little thing nodded its eyestalks and held its tentacles up. Bridget picked it up and gave it her forearm for it to stand on.
“Oh!” The shopkeeper said, surprised and delighted at the little beast. “Hello there! I’m sorry I didn’t see you.” She pushed her sunglasses up her nose, and Bridget saw the twinkle of an enchantment on their lenses to let her see past the invisibility spell.
“What would you like?” Bridget asked, and the monster slapped a tentacle onto the glass, pointing to rocky road.
“All right,” the shopkeeper said with a smile as she scooped the ice cream. “Would you like anything?” she asked Bridget.
“No, thank you,” Bridget said.
The shopkeeper handed over the cone and the little monster took it in both its tentacles. Its mouth - a giant hole full of teeth - opened right under its eyestalks, and it ate the cone in one gulp. Bridget’s eyes widened and she froze at the sight of all those fangs, but the beastie didn’t notice.
The monster rubbed its closed eyeball against Bridget’s cheek and hopped out of her arms. She watched as it waddled down to the water and jumped into the waves.
Bridget looked to the shopkeeper, who was humming and cleaning the glass.
“Let me pay for the ice cream,” she said, reaching into her bag for her wallet.
“Oh no.” The woman took off her glasses, revealing two holes in her human skin suit. Eyestalks came out, and she opened her mouth to smile, and revealed the same sharp pointed teeth. “It’s no charge for my nephew.”