Gertie and Bridget go out in the rain 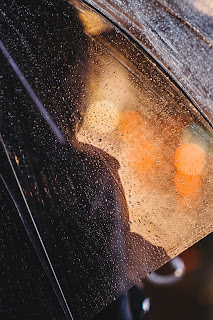 Bridget groaned as the night wind swept rain up under her umbrella and into her face. She hopped from foot to foot, trying to stay warm.
“This was a terrible idea,” she muttered to herself, since Gertie certainly wasn’t listening or about to agree.
The clouds were thick, but some starlight still filtered through breaks, promising the possibility of moonlight. Gertie was out in a storm, hoping for that to come true.
Gertie, of course, was wearing a hat that made her body and clothes waterproof, so she was in a light jacket over a t-shirt, unlike Bridget’s feeble attempts at keeping herself warm and dry via a sweater, rain boots, and a rain jacket. She held an umbrella gripped in her clammy fingers, which was enchanted to react to raindrops by lighting up around the spot they hit. This feature was able to be turned off, but her fingers slipped too much to do so, so at the moment the umbrella was reacting like it had fireworks in its material.
“Come on,” Gertie mumbled, looking from the bed of flower buds on the ground to the sky.
The sisters were out in the rain for their own reasons. Gertie was there because that morning she had used up the last of her lunas buds, and lunas buds were essential for her to finish her potions homework that was due the next day. Bridget was out risking the wrath of hypothermia, because when Gertie had announced her mission, Bridget had decided she would rather hang out with her sister than go back to her room and be confronted with her roommate’s glare at her presence.
It was becoming increasingly obvious to her that this was a terrible mistake, but she was freezing and drenched already, so she might as well see it through.
“Maybe we should just head back,” Gertie said, frowning forlornly as she saw her sister shivering.
“No, I’m sure it’ll come out soon,” Bridget said. “But if I get a cold from this I’m blaming you.”
Sure enough, the cloud cover broke and the moon shone down on the school gardens. The bed of flowers that Gertie had been inspecting blossomed.
They were small and white, sparkling in the light as they gathered what energy they could from the moon.
Gertie kneeled and, using pruning shears, clipped the buds off and stowed them safely in her pocket.
“I just want to point this out,” Bridget said. “You could have just picked them in the day.”
“They wouldn’t grow back in the day,” Gertie said, pointing to the little white budlets that had already grown on the clipped stems. By morning they would be half the size of the ones in her pocket, and after a few hours of uninterrupted moonlight they’d be fully grown. Gertie wasn’t about to keep anyone from using the lunas buds.
“You have enough?” Bridget asked. Gertie snipped one more bud into her hand and nodded. The two girls all but ran back through the muddy grounds of the school.
They reached the dorms and climbed the steps of Gertie’s building to her room. Bridget left puddles in her wake and slipped a few times, but ultimately made it safely to her sister’s floor.
“I’m borrowing one of your sweaters,” Bridget said when the door was closed behind them. She hung her jacket and peeled her sweater off, then rummaged around Gertie’s closet for a warm, dry replacement.
Gertie, meanwhile, placed all the buds in her school-issued Advancer.

“All good practitioners know that ingredients are finicky things,” an advertisement for a particularly fancy Advancer would say. “They require a certain potency. You can’t just take normal lizard tails and pop them in a bubbling truth serum batter. They need to be aged. Back in the Gray Era, this meant we had to hang herbs and flowers and other ingredients along the windows of cottages, or bury them for years, to dry and age. Now, we have the Skipstep Advancer! Just pop the ingredients in the top, adjust the setting, press this button, and prest-o change-o your ingredients are as old as you need them to be! Now electric powered!”

“Do you ever wonder what would happen if you turned it on with your hand still in there?” Bridget asked, wrapping herself in Gertie’s down blanket.
“They have safety measures against that,” Gertie responded with an eye roll.
“Because it’s happened before, right?”
“Shut up.”
As the lunas buds aged, Gertie filled her electric kettle with water from the water fountain down the hall. She set it to boil, and got out the paperwork for her assignment.
The Advancer dinged at the same time that the electric kettle boiled and clicked.
Gertie pulled the buds out of the Advancer, putting most of them in a tall, blue jar that kept out any light that would damage the buds. The remaining few she put in a mug and poured the hot water over.
After a few minutes, Gertie took a sip of the lunas tea. The caffeine washed over her and she grinned.
“Perfect. Now I can finish my potions homework,” she murmured.
“Tea?” Bridget exclaimed. “It was just for tea?”
Gertie gave her an incredulous look. “What did you think it was for?”
“Potions!”
“Oh.” Gertie took another sip. “I can see how you would think that.”
“Ugh,” Bridget flopped back onto Gertie’s bed.
Gertie pulled another mug down from her closet. “Want a cup?”