Gertie and Bridget doodle in class 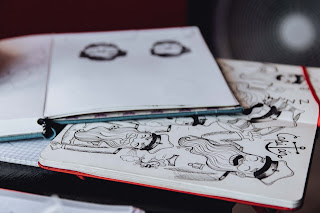 “And then to solve the equation, you take the derivative…”
Gertie tuned out her math teacher’s blather and started doodling in the margins of her notebook. She wouldn’t need derivatives to calculate the revenue of her eventual enchanting store, or its taxes, or anything significant in real life.
Although if her sister Bridget heard her talking like that she was in for a lecture. Bridget loved all things math.
A large, carnivorous looking fish took shape over the printed lines and Gertie drew some bubbles coming from its teeth-filled mouth.
Out of nowhere, a folded note landed on her desk. She opened it to see a similar drawing of the fish she had just doodled, but looking far more lifelike.
To her surprise, it began moving on the piece of paper - swimming, actually. And then it swam right off the page, floating in mid air and blowing bubbles. Its teeth snapped at Gertie and  she gasped.
“Yes, Gertie?” Mrs. Wintesnapper paused in the middle of her lecture.
“I-” Gertie looked where the fish had been floating and saw it was gone. “I, I think I just understood derivatives properly! For the first time!”
Seeing the contemptuous stares of her class, she felt her face redden.“Sorry, though, for interrupting.”
When the class had resumed, the quiet girl sitting to her right leaned over. “Sorry,” she whispered.

Bridget walked into the cafeteria and saw Gertie sitting at a table with an unfamiliar girl. They were laughing.
“Hi,” Bridget said, as she took a seat at the table.
Gertie tilted her head pointedly to the girl. “Bridget, this is Vivien. Vivien, this is my sister.”
Bridget could see that Vivien was half a head taller than Gertie, even though they were sitting, and her legs under the table reached the opposite bench. She wore a loose hoodie and jeans, seemingly comfortable despite the cool weather.
“Nice to meet you,” Bridget said.
“Likewise.” Vivien smiled.
Between the two girls was a notebook filled with detailed drawings. One page had a still life sketch of a teenage girl excitedly talking to someone out of frame, with the date and “coffee girl at Memos” written in the lower left corner. The opposite had little doodles of flowers and birds and butterflies. Gertie flipped the page, and Bridget stared at the picture of a graceful mother holding a child who was reaching out animatedly toward the front of the page. The toddler looked like he might be ready to jump out altogether.
“Those are really good,” Bridget said.
Vivien blushed. “Thanks,” she said, averting her gaze. Her voice was soft and had a bit of an accent from the coast opposite of Flories Boarding School’s.
“Yeah, but also...,” Gertie grinned. “You’ve got to see this. Vivien?”
Vivien cupped her hands around a drawing of a butterfly. She whispered briefly into her hands, and as they pulled away a puff of smoke sizzled off the page from the use of power.
It wasn’t the only thing.
The butterfly itself, in beautiful, sketchy grayscale, flapped itself into the air. It twirled for a moment, showing off.
Bridget lifted her hand to touch it, and instead it landed on her finger. She jumped in surprise and Gertie laughed a little.
“Don’t worry, I reacted the same way.”
The butterfly took off again, flying around Vivien’s head.
“Wow,” was all Bridget could say.
“Get this,” Gertie said. “She’s only been practicing for a few months.”
“I’ve been interested in magic for a while,” Vivien said. “But my parents didn’t want me taking any classes. I just learned this from watching videos online.”
Gertie waved her hands wildly in excitement. “That’s exactly how I’ve been teaching myself how to enchant!”
“How does it work?” Bridget asked, as the butterfly landed on one of Vivien’s colorful drawings of a flower.
“I summon spirit energy to fill the drawing,” Vivien said. “You remember when you brought your history diorama to life last semester?” she asked Gertie. “It’s what gave me the idea.”
“I mean, that was me controlling the dolls with my hat,” Gertie said. “But, wow, spirit energy? I’ve never tried that.”
“Is it safe?” Bridget asked.
“Yes,” Vivien nodded. “As long as I stay away from anything that would take too much energy. Like a human.”
“That sounds like a challenge,” Gertie said, a mischievous twinkle in her eye.
Vivien laughed nervously. “No, I think they were serious.”

The scent of popcorn had infected Gertie’s room by the time Vivien arrived on movie night. Bridget had been hanging around all day, and Ernest had been summoned from across the hall by the buttery smell, so the gang was all there.
“We’re watching The Arrow in the Tree today,” Gertie informed Vivien.
“Going back to the classic era of animation,” Earnest added, looking up. He nearly jumped in surprise when a bird poked out from underneath Viv’s curly hair.
“Who’s your new friend?” Bridget asked. Vivien sat down and the little bird hopped out to the edge of her shoulder. It was hard to tell that it was just a sketch, since it was even three dimensional, but upon inspection there were only a few individual feathers, the rest having been given up on for time’s sake. To Gertie and Bridget’s surprise, it gave out a loud peep.
“This is Bobby,” Vivien said.
“Hi, Bobby,” Bridget said with a smile. She held out a finger in front of the blue jay and it stepped delicately on. Its head bobbed about like a real bird, its pupils dilating as it peeped again in surprise.
Ziggy, decidedly jealous at this turn of events, barked to get Bridget’s attention. Gertie, who was wearing her baseball cap and thus could see and hear the ghost dog, patted him gently on the head.
Bobby peeped, and took off flying around the room, landing on Ernest’s head for his perch.
“Speaking of classic Animation,” Ernest mumbled under his breath.
Bridget smiled at the pun.
“Did you just make him?” Gertie asked.
Vivien shook her head. “Last night. He slept in a nest of socks.”
“Wow,” Gertie said, raising her eyebrows. “It’s not draining you?”
Vivien shrugged, pulling her knees to her chest. “Are we going to watch a movie or...?”

A month passed and Vivien became closer to Gertie, Bridget and Ernest. The four actually became a group of friends, despite Gertie’s thoughts that she and Bridget wouldn’t find any at Flories Boarding School. The winter snow turned to slush, and the beginnings of flowers poked through the muddy ground. The group of four did homework together, played video games on Ernest’s consoles, and cheered on Bridget during her basketball games. Sometimes, when Ernest was doing homework and Bridget was at practice, Gertie and Vivien would try new spells and potions.
One day there was a knock on the door, and Gertie answered it to find a bewildered looking Vivien, with little Bobby on her shoulder. She immediately assumed that her friend had gotten a bad grade on a test.
“What’s wrong, Viv?” Gertie asked, pulling her friend inside.
Vivien took a seat on Gertie’s bed, shoulders slumped and her legs limply hanging off the side. “I have to go back west this weekend,” she said.
Gertie could hear a sob in Vivien’s chest threatening to break out, and grabbed the tissues she kept on her desk. “Oh,” Gertie said, keeping her curiosity at bay. She sat down next to Vivien, offering the tissues.
Vivien ignored them. “There’s no way I can take Bobby,” she said, in the same flat tone. The bird pipped from her shoulder at his name. “My parents would...kill me, if they found out about him...and everything else.” Viv stifled a sob, taking a deep, shaky breath.
“Vivien, are you ok?” Gertie put her arm around her shoulders.
“I was hoping,” Vivien said, holding back tears. “I thought you could watch him? He doesn’t eat or drink or anything, so he won’t be a bother.”
“Of course he won’t.” Gertie said. “But, Viv,” she moved to kneel in front of her friend. “What’s wrong?”
Vivien didn’t want to say it. If she said it out loud, it would make it too real.
“I’ll see you when I get back,” she said. She took Bobby from her shoulder and left him on the bed.
She all but ran from the room, and Gertie was left with the little bird that peeped in worry.

~*~*~
One night while Vivien was away, Bobby was peeping along beside Gertie as she did her homework. She had started to get used to the bird’s music, and was thinking of getting her own, a real one, after she gave Bobby back to Vivien.
Then, in the middle of a trill, the music stopped.
Gertie looked up. The lamp that Bobby had been using as a perch was empty.
She sent a text to Vivien immediately, not knowing what had happened.
I couldn’t spare the energy anymore, she replied. Sorry, I should have let you know.
Gertie sent back. Are you ok? Do you need anything?
No. Came the reply. Gertie didn’t know which question she was answering. But Vivien didn’t text back again.

At the next movie night, Vivien arrived with a little blue jay on her shoulder. As soon as he saw Gertie, he began to whistle a familiar tune.
“Bobby!” Gertie exclaimed.