Gertie and Bridget sneak out 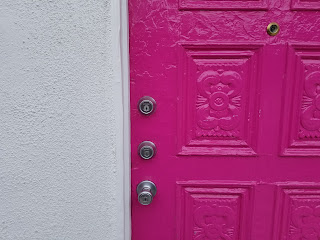 It was past eleven when the girls disembarked. There were many people on the platform, all waiting to board the train. All looked cheerful, and smiled at the girls as they let them pass.
“Coming from Baxter’s?” Gertie asked, and a bunch nodded.
Some were holding canes or wands, others wore tall pointy hats. Bridget could see third eyes or scales hidden under enchantments and low hats and long sleeves.
There was a spark of energy in the air, as there always was when the girls finally found themselves among other members of the magical community.
They climbed the stairs into the open air and found themselves in a long line of people.
“And this is the earliest we’ve ever arrived!” Gertie said, staring at her watch in frustration.
“Oh, come on,” Bridget said with a smile. “It’s always worth it.”
It took nearly half an hour, but finally they rounded the block corner and could see the green neon sign.
Baxter’s Half Moon Ice Cream
The OPEN sign glowed, as it did roughly twice a month. By the time they stepped into the diner, it was almost midnight.
“Mallons!” Daisy, the hostess with flowers weaved through her hair, reached down to hug the girls. “So good to see you again!” She stood and planted her hands on her hips. “And what are you doing here? It’s a school night and you could get in trouble!”
“We did all our homework,” Bridget said.
“And we promise to drink plenty of black tea tomorrow morning so we don’t fall asleep in class,” Gertie finished.
Daisy sighed. “Like I could say no to you. Booth or counter?”
Ideally the girls would choose counter, but that would lead to longer conversations with Baxter and Iris and any magic practitioners sitting next to them. They couldn’t afford that much time when they had to head back to school soon, so in stereo they piped, “Booth!”
Once seated close to the door, where Daisy could chat with them, the hostess winked. “I’ll tell Iris to send out whatever Baxter’s got for you.”
A minute later, Iris, one of the waitresses, brought out a large sundae bowl with chocolate and coffee ice cream, topped with fudge and whipped cream to place in front of Gertie. A large milkshake and a tumbler with the excess was for Bridget. Just what they both loved.
“Baxter says hi, and that you need to come back when the half moon is on a weekend so he can talk to you,” Iris said.
“Tell him to open his restaurant during other days of the month,” Gertie retorted, her spoon full of ice cream inches from her mouth.
“Yeah, because he hasn’t heard that before.”
Iris walked back into the kitchen, emerging soon after with ice cream sandwiches and standing in front of an empty table as Daisy led a group of four to it.
“We were hoping to order-” one of the group members started.
“No ordering, sorry,” Iris said, plopping the tray down.
Another member took a big bite of one of the sandwiches. “Yeah, she’s right, this is better.”
“You know, if you honed your seer abilities more, you could probably open a place like this someday,” Gertie told Bridget. “The whole ‘know what will make customers the happiest even when they don’t’ thing would probably be really fulfilling for you.”
“I’d have to learn how to cook first,” Bridget replied. Then they took their first bite and sip of their ice cream, and all coherent thought left them.
In unison, they let out a satisfied, “Mmmm.”
The ice cream was so creamy. The chocolate’s flavours were so varied and had a bit of spice to tickle Gertie’s tongue. The coffee still had grounds mixed in that added crunch and pungent flavour. Bridget had a “simple” vanilla shake, but the vanilla beans that Baxter used must have had some sort of magic in them to taste as good as they did. No matter how Bridget begged, he refused to tell her his secret.
Nobody made ice cream as good as Baxter. It was why - even though he was a psychic who served his customers what they needed instead of what they asked for, and even though his shop was in a city bubbling with anti-magic sentiment, and even though it was only open twice a month - the magical and non-magical communities alike flocked here.
The first time Eloise had taken the girls to Baxter’s after their dinner, because they behaved, they had wanted to go back the next night. They had been so disappointed to find out it was hardly ever open. It was the perfect way for Eloise to bribe them. If you’re good for the next week, we’ll go to Baxter’s when it opens.
“We should head back soon,” Bridget said as the ice cream feast came to a close.
“Why? Who’s going to notice anything’s wrong?” Gertie asked. At that exact moment, Headmistress Clearwater walked into the diner and locked eyes with Gertie. Their table was too close to the hostess stand. That was a mistake.
The headmistress was dressed down, wearing jeans and a heavy jacket instead of the suit that the girls normally saw her in. She and several other teachers lived on campus. They had to stay near the students in case of any emergencies.
And now she was standing in front of them, seemingly as guilty of sneaking out as they were. Gertie and Bridget would have found the situation funny, if they hadn’t been waiting for the decree of detention - or worse - that could be imminent.
Headmistress Clearwater’s lips pursed as she stared down at them for an uncomfortably long moment.
“I won’t reactivate the gate until I get back,” she finally said, and looked away as if she hadn’t even seen them, resuming conversation with a friend.
“Check please!” Gertie shouted.
Iris was already placing it on the table.